Macapa Drive’s “Flying Wing,” as the home on 7000 Macapa Drive in Los Angeles is known, is one of the personal favorite projects for architect Dean Larkin of Dean Larkin Design. In large part, he feels this way because he helped save the house from demolition and reimagine the design for the 21st century.

The “Flying Wing” was originally designed in 1974 by well-known architect Henry Gesner. The house design was commissioned by the president of Cooper Lumber, Mike Hynes. Mr. Hynes wanted a home that would represent his company, so the design would incorporate a great deal of lumber and wood poles. In addition, Mr. Hynes requested that Mr. Gesner use a bird for inspiration.

Mr. Gesner did just that. Interestingly, his uncle John Northrop, 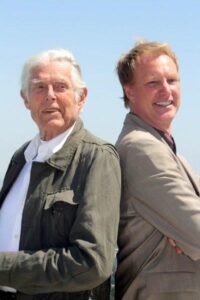 who was an engineer and aircraft designer, invented an airplane prototype that he called the “Flying Wing,” among other aircraft. Mr. Gesner designed a home atop a hill that looks like a plane or a bird perched and about to take flight.

The home was nearly purchased by a celebrity who planned to demolish the house, but instead Dean Larkin was asked to help renovate the home in 2010 by music producer and radio personality Barry Richards and his wife. Dean would open up the floor plan and expand the home’s views of LA. Visitors can see many popular landmarks from the more than 270-degree views, including the Hollywood Bowl.

With regard to the design project, Dean notes that “the 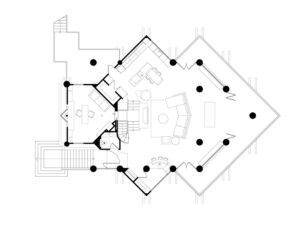 house transformation began with removing heavy walls in order to have each room open up to the incredible views of LA. As the images below highlight the home truly brings the outdoors in and the indoors out. Even the soaking tub can be open to the beautiful weather and views for an indulgent evening soak.

“We created a separate garage structure and increased the square footage. We added retaining walls to triple the yard size and to install a spectacular curved pool that emphasized the magnificent views.” Dean adds, “We were committed to bringing the home design into the 21st century. In doing so, we ended up with a house that will be an architectural beacon for future generations.

Dean Larkin Design was established in Los Angeles in 1999. This modern architecture firm maximizes the intrinsic potential of a location while meeting each client’s specific lifestyle, business or institutional needs. Dean Larkin is very familiar with both historical and contemporary homes in So Cal and the entire Los Angeles area, and the firm endeavors to achieve a complexity that is multi-layered with an effortless elegance. For a design that is modern and innovative, unlocks your location’s innate potential by making specific use of light, views and more, and is uniquely designed for the way you live, contact Dean Larkin for a consultation.